Governments can’t stop cryptocurrencies, but they can make it much harder to access them. So it would make sense that unfriendly government policies in the world’s largest economies would play a role in driving down the price of bitcoin (BTC, -0.35%).

Governments can’t stop cryptocurrencies, but they can make it much harder to access them. So it would make sense that unfriendly government policies in the world’s largest economies would play a role in driving down the price of bitcoin (BTC, -0.35%). 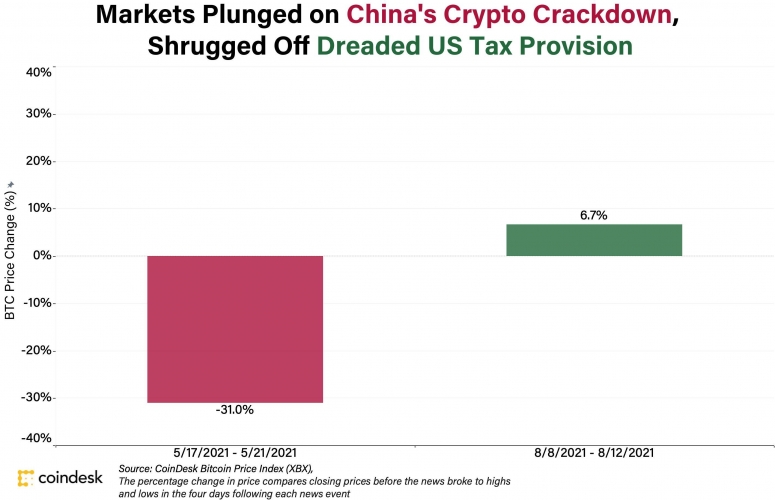 As a case in point, in the few days after China reiterated its crypto crackdown in May, bitcoin at one point plunged by as much as 30%. The drop was another reminder that when China speaks, the market listens.

This month, a highly controversial crypto tax provision in the $1 trillion infrastructure bill passed through the Senate, despite ardent attempts to amend it. Crypto advocates claimed that the provision would make it impossible for miners, software developers and other crypto-related actors to comply with U.S. tax regulations, thus threatening to drive much of the industry overseas. This would seem to be a pretty bearish sign.

But it wasn’t, at least over the short term.

In the few days that followed the advancement of the bill, bitcoin shot up by as much as nearly 7%. In fact, shortly following the drama in Washington the entire crypto market reached a market cap of $2 trillion, a height not seen since May.

This week, the provision will move to the House, where the language may or may not change. It remains to be seen whether the market responds to what happens in Washington.

Why did bitcoin seem to react so differently to the U.S. compared with China? As with anything bitcoin price-related, it’s impossible to say for sure, and there are many other factors that affect prices. But here are some of the more plausible theories.

China’s actions look final, but the U.S. is just getting started.

China has long been pro-blockchain and wary of crypto, and this is far from the first time that Beijing has cracked down on the industry. But China’s government seems to mean business this time, at least for shutting down cryptocurrency mining. Chinese miners seem to understand that protesting this policy is unlikely to change anything, and so they are already seeking their fortunes outside the country.

The U.S. bill’s passage through the Senate, however, is just the beginning. Now lobbying efforts will focus on the House, where the bill will be discussed next week. And if the language isn’t amended there, the crypto industry is not going to give up. Even if the legislation enacted as written, there’s still a chance the Treasury Department will interpret the expansive definition of the term “broker” in a favorably narrow way.

What happened in China is “a complete sweep out,” said Michael Wu, CEO of Amber Group, a crypto trading firm in Hong Kong. “The U.S. is seen by many as a gateway to dialogue and discussions.”

“The key is that it’s not the final law yet so the market is not pricing that in yet,” he said. “People believe that sanity will prevail at the end and things will be worded better.”

What happened in Washington is actually good for crypto

There are a few possible silver linings to the crypto tax provision drama. The first is that crypto finally has reached its mainstream moment. It played some part in holding up a $1 trillion bill. It forced U.S. lawmakers to at least acknowledge its existence and relevance. We also saw that the crypto community, which is famously decentralized and often divided, is starting to become a real political force. Advocates didn’t get their way this time, but they definitely got people to pay attention.

“The moral victory has been won,” CoinDesk Chief Content Officer Michael Casey wrote. “The once fringe-dwelling crypto community finds itself legitimized, which will eventually result in a policy environment that is constructive to the industry.”

It’s not China or the U.S., it’s just market timing

Or maybe, this is just bitcoin being bitcoin, and these price movements have little to do with the politics of China or the U.S.

The China crackdown came on the heels of a sizzling market, but by then, prices were already starting to decline. The CoinDesk Bitcoin Price Index (XBX) was trading at over $42,000 by the end of May 17, not long after coming off of its all-time high of over $64,000.

“It has more to do with the market participants than the news itself,” says Qiao Wang, partner at Defi Alliance, an accelerator for startups. News from both countries was equally bad, “but when the China news happened it was very frothy. When the U.S. news happened, most weak hands had sold.”

“Market timing is also a key factor,” says Jason Lau, chief operating officer of crypto exchange Okcoin. “The China news came about when markets were already overextended, declining, and looking for more negative news.” In the case of the U.S. infrastructure bill, on the other hand, “with bitcoin recovering, the market was actively looking for positive news – that’s why you saw the positive spin of ‘it’s amazing how the industry was able to get together and bring a united voice.’”

The U.S. isn’t the center of the crypto universe

This may be my favorite theory. The basic idea is that the market acknowledged that this supposedly disastrous crypto provision might become a reality, but ultimately, it didn’t matter much.

Because even in the worst-case scenario, where a big part of the digital asset industry had to leave the U.S., the crypto market would live on.

It bears repeating: We don’t yet know how the market will react to whatever happens in Congress this week. But there is still reason to believe that the U.S. is not the center of the crypto universe.

There is, of course, no question that the U.S. is a major force in crypto, especially when it comes to institutional investment, but crypto is becoming increasingly global. Asia has long been a critical player, and we are likely to hear more and more about Africa and Latin America. While it is notoriously hard to accurately track crypto use by geography, Chainalysis’s 2021 crypto adoption index ranked  the United States at No. 8, after Vietnam, India, Pakistan, Ukraine, Kenya, Nigeria and Venezuela.

One could argue that in recent years, China may have been more influential than the U.S. That’s why the global market shuddered, albeit briefly, when China banned initial coin offerings and shut down mainland exchanges in 2017. Just a year earlier, the majority of bitcoin trades were in Chinese yuan. China’s crypto market remained active after 2017, but the exchange shutdowns made it much harder to estimate the number of traders.

For mining in particular, China was widely seen as wielding disproportionate power, especially in hashrate, the computing power used for mining. Bitcoin’s hashrate dropped by over 50% in July from May, when China cracked down on mining, according to data from Glassnode. The hashrate has since begun to recover as miners set up rigs in other parts of the globe.

“The China mining news was an untested shock to Bitcoin the network, with actual immediate impact. This led to true uncertainty around how the hashrate and network would be affected,” Lau said. “Compare this to the U.S. policy discussion, which might have led to some longer-term effects specific to the U.S. Too vague and nothing related to the health of the network itself.”

Now, with miners spreading all over the world, China’s influence over the Bitcoin network is declining.

We may soon see a day when no single government can have a major impact on the price of bitcoin. Given Bitcoin’s provenance as a decentralized currency that is immune to government control, that’s how it should be. 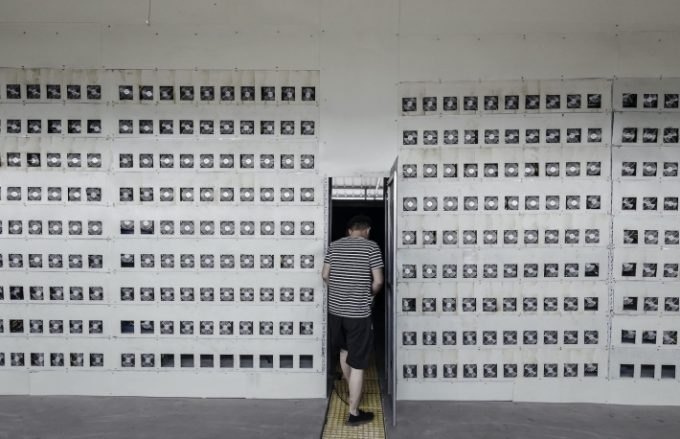 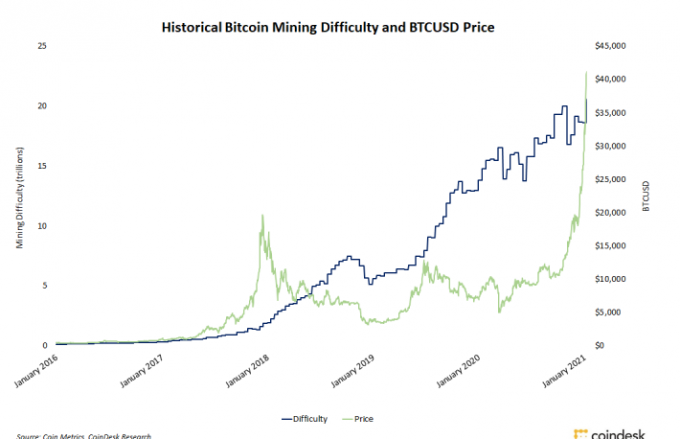 Bitcoin’s mining difficulty just reached a record high above 20.6 trillion as more people are mining at a larger scale than ever before thanks to ballooning mining revenue and bitcoin’s parabolic price rally. 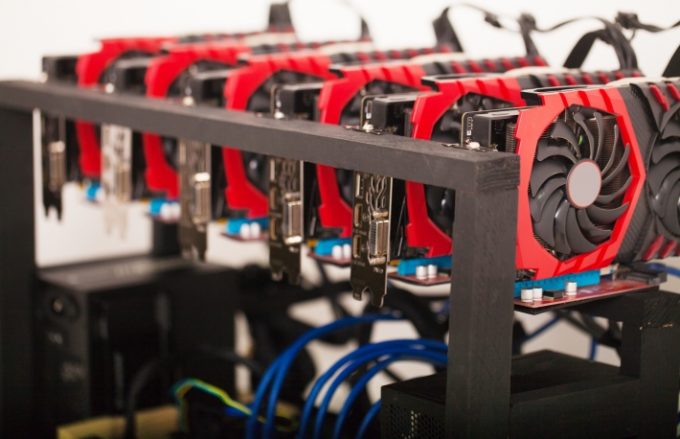